Harry Brown grew up in the apartment above Brown's Grocery Store on 32nd and Girard Ave So. In his free time, when he wasn't delivering groceries for the family business, Brown was playing sports, including skating and playing hockey at Minneapolis Arena and Lake of the Isles all winter long. After graduating from De La Salle High in 1941 he brought his hockey skills to the University of Minnesota, skating for the freshman squad in 1941-42.  Brown then served his country in WWII in the US Naval Coast Guard.  Brown returned from the service and completed his education at the University of Minnesota, graduating in 1949.

Brown then began a 35 year teaching career in Minneapolis where he also was able to coach varsity hockey at Henry, Vocational, North and Roosevelt high schools.  In the 1963-64 season, his Henry varsity team won the Minneapolis City championship, which then went on to finish 3rd in the state tournament. Brown amassed an impressive record during his HS coaching career with a 70-49-8 record (all years coaching HS hockey).  Brown was also a pioneer in the Minnesota high school hockey system and was instrumental in bringing (& winning) a lawsuit against the MSHSL which would allow high school hockey players to practice, develop and compete in the off season.

Brown's hockey acumen was, however, recognized far beyond high school coaching.  From 1967 to 1975 Brown was a Scout for the Boston Bruins. The Bruins won 2 Stanley Cups during his tenure and Brown received a Stanley Cup ring for his contributions to the organization. During these very busy years, Harry raised 11 children in Minneapolis with his wife Mary.  All 11 children graduated from Roosevelt high school.  He also earned a Doctorate in Philosophy from the University of Minnesota in 1970.   Harry then decided to share his hockey knowledge by publishing two instructional hockey books - "Ice Hockey Skating, How To Develop Power And Agility In Skating" and a "Goaltenders Guide".

Harry was a powerful advocate for improvements in several hockey programs and organizations.  He worked tirelessly to provide opportunities for hockey players at all levels in Minnesota.  In 1990, he was the winner of the “Maroosh” award – Inscription reads: Presented by MN North Stars -in Memory of John Mariucci – God Father of MN hockey.  The award is given in recognition of outstanding service or contributions to hockey in MN by elite within the state or elsewhere.  Harry was also a key contributor in the formation of the Junior Hockey system in Minnesota in 1965.  He was an active supporter of the Minneapolis Junior Bruins and St.Paul Vulcans well into the later years of his life.  He received the Team Voyaguer Friends of Hockey award in 1996 (presented by Herb Brooks) for his contributions to Junior Hockey.

In 2012, at the age of 88, Harry was inducted into the Minnesota High School Hockey Coaches Hall of Fame.  Harry passed away in April of 2014, leaving an impressive mark on the state of Hockey. 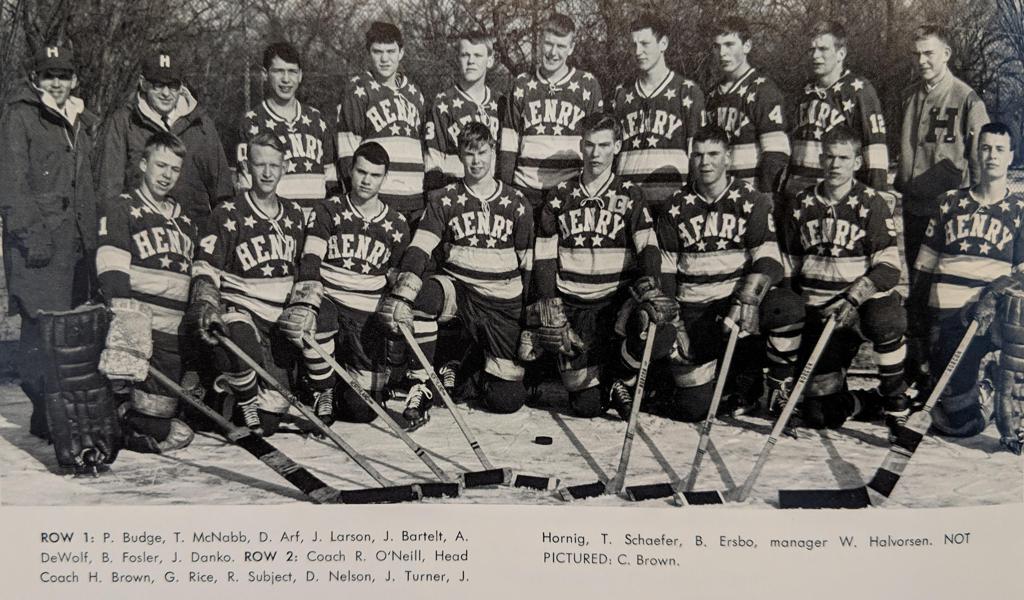 Founded Junior Hockey in Minnesota in 1965

Won litigation against the State High School League that allowed high school players to play in leagues outside of the high school season. 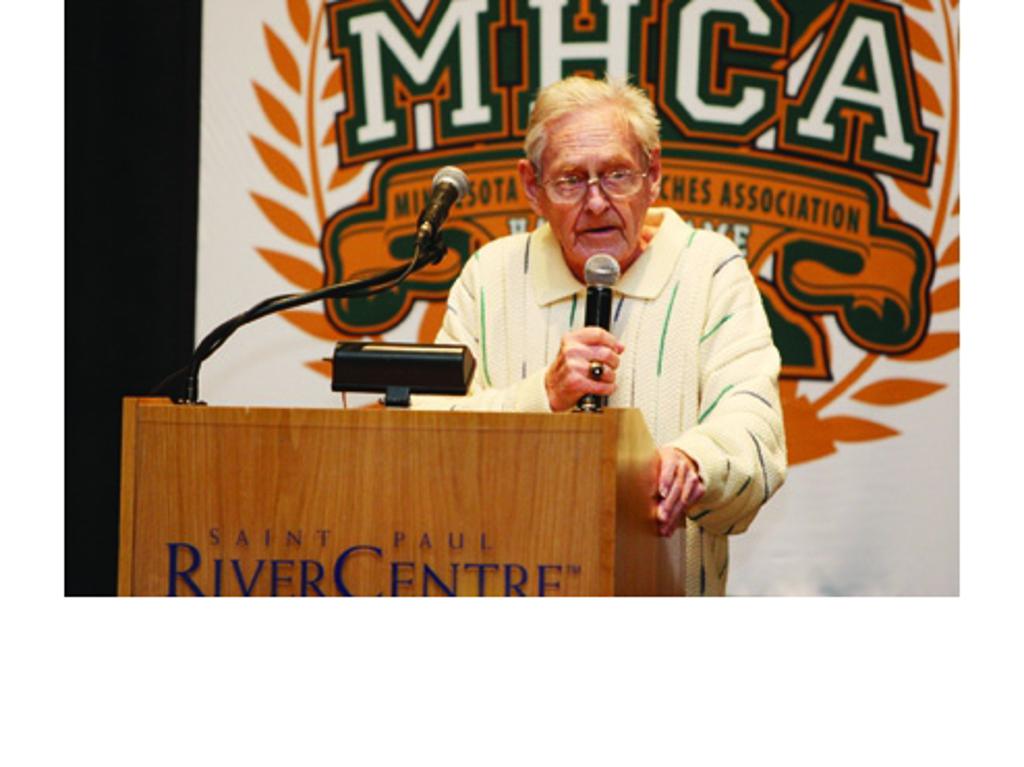 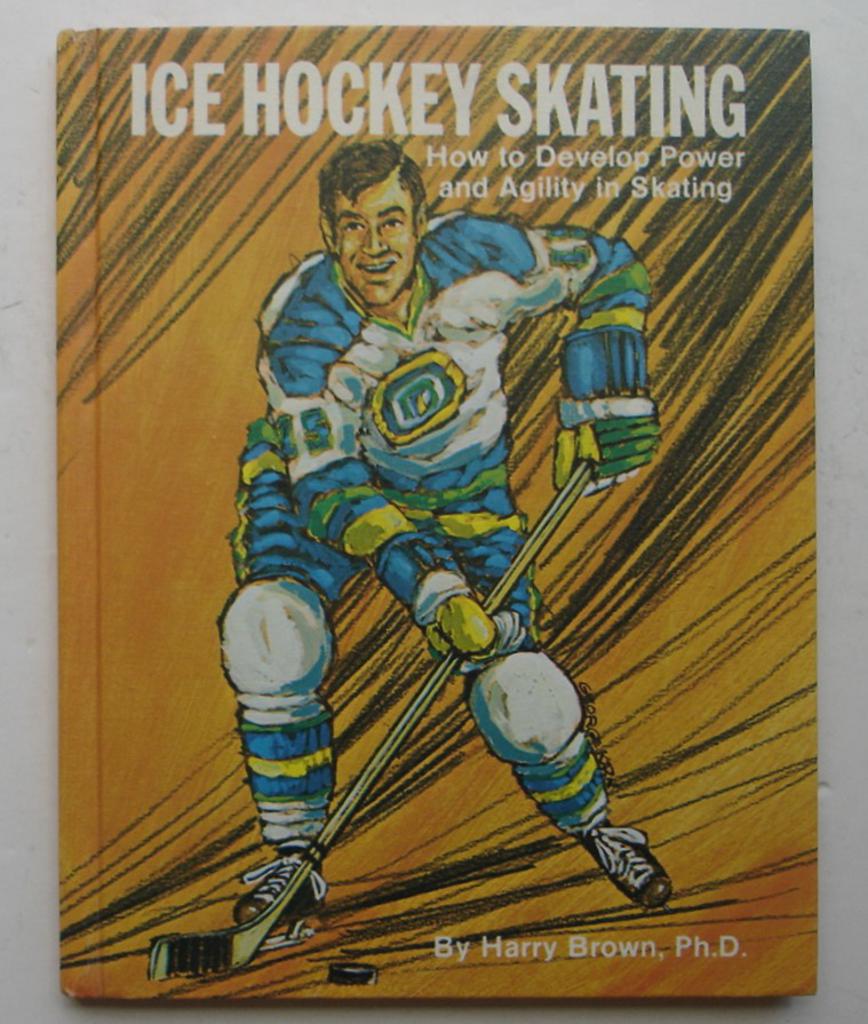 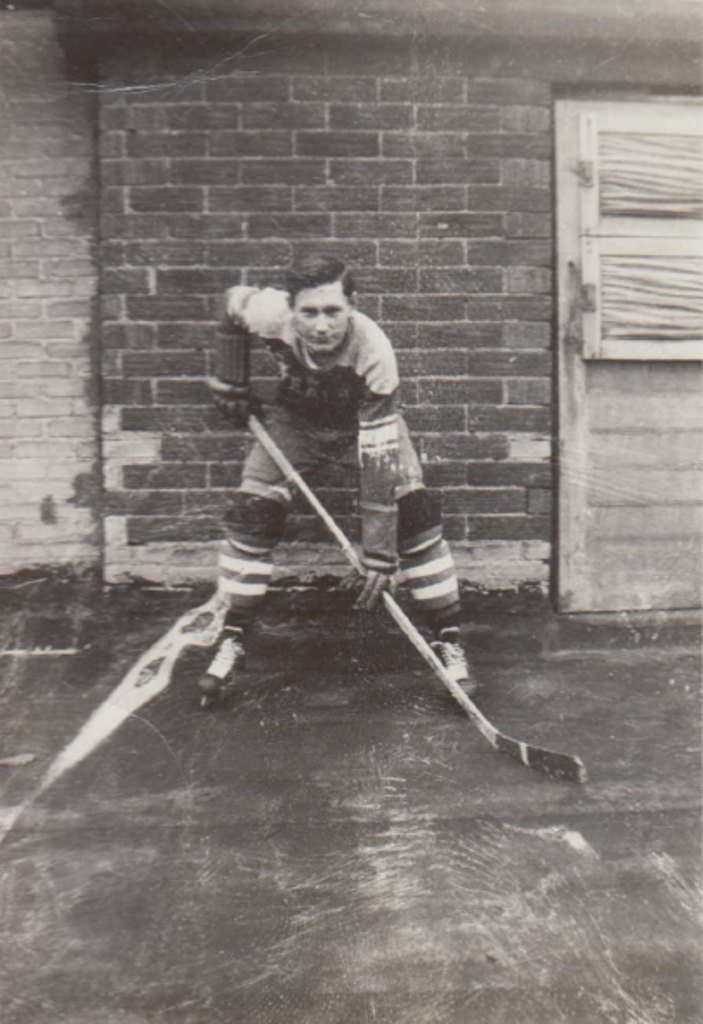 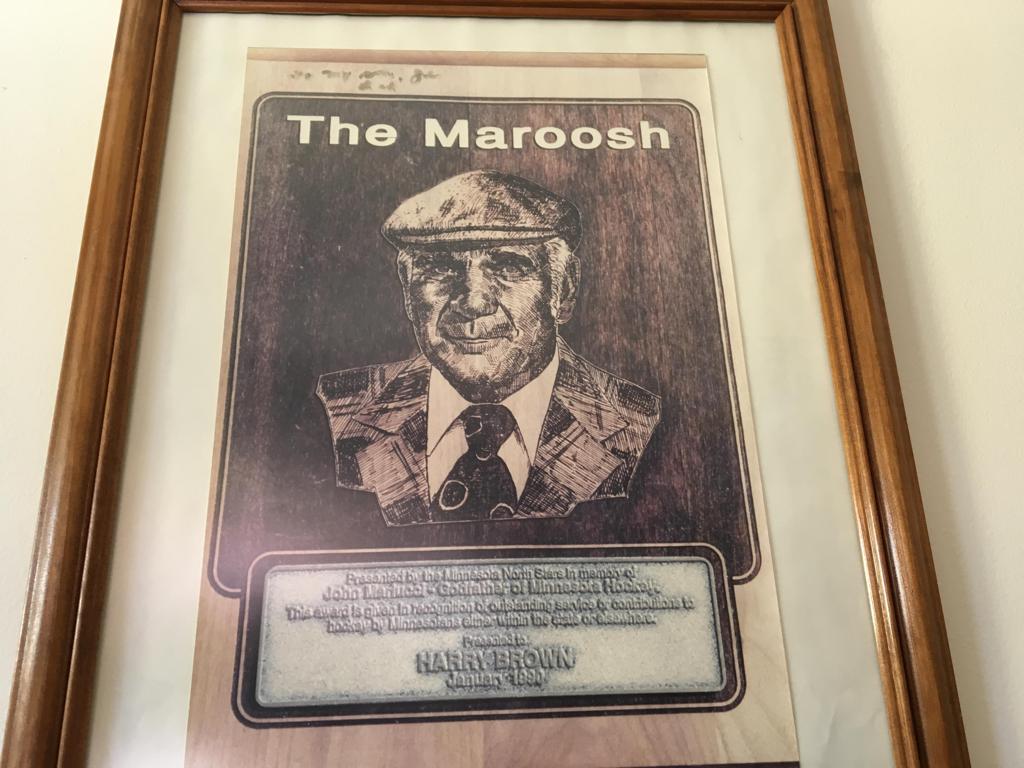 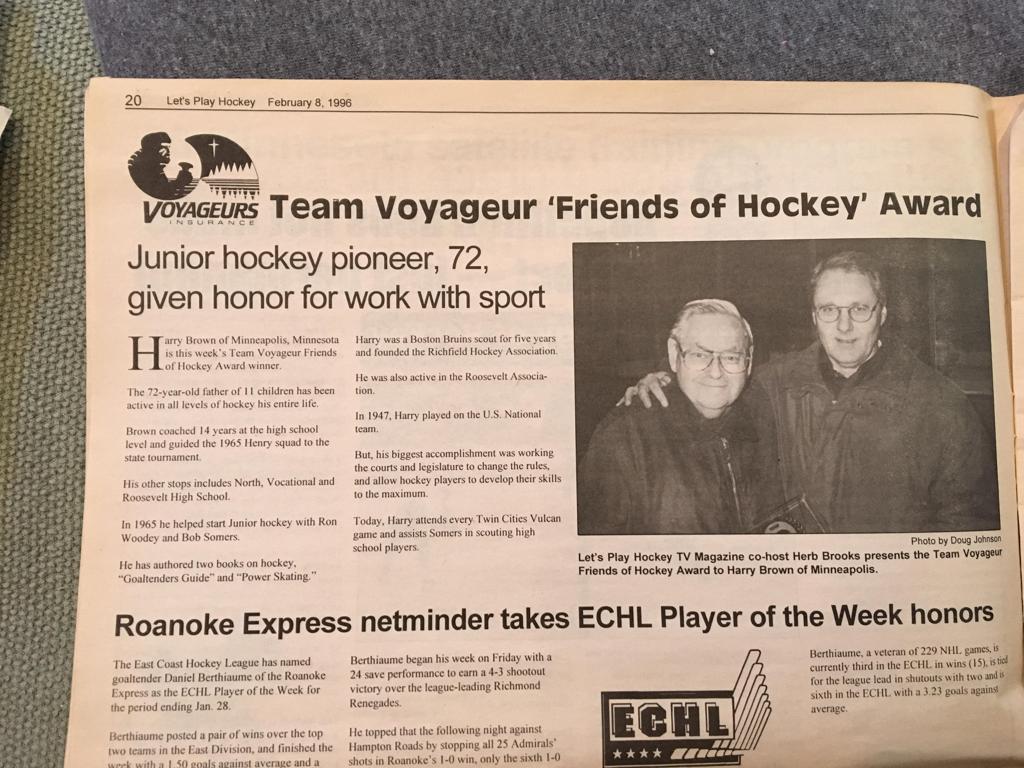 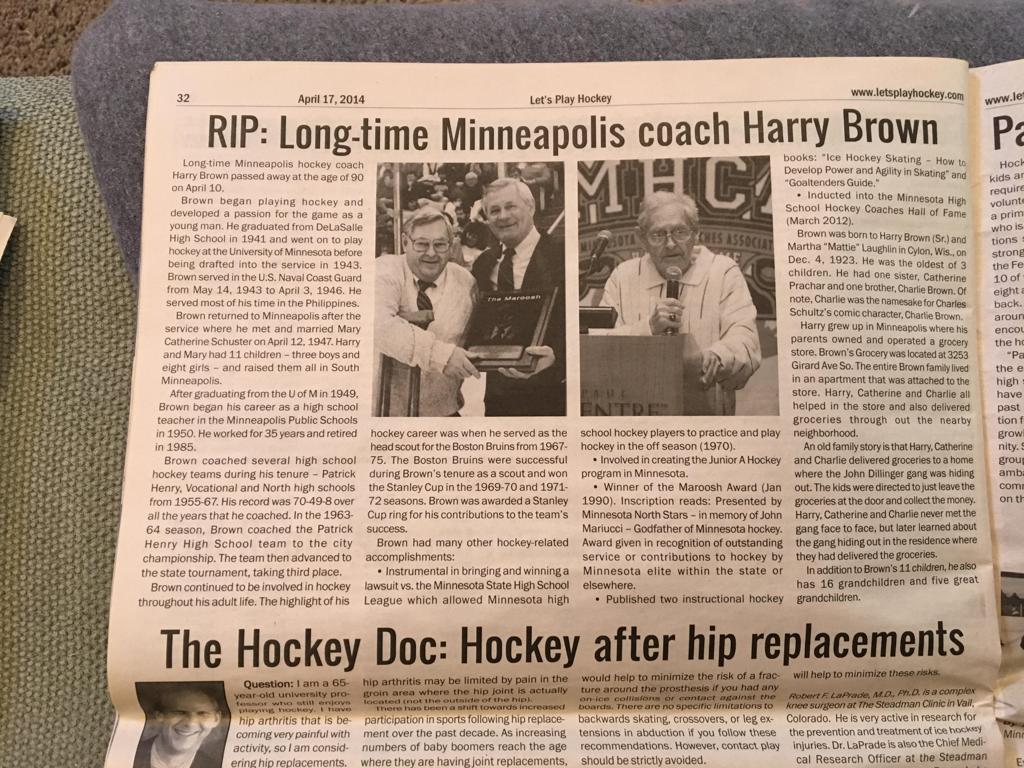