As the hockey tryouts in South Minneapolis began for the Roosevelt Peewee team, Bill St. Mane stood in the stands and one player kept catching his eye. While the player’s skills were above average…his skates seemed to be many, many sizes too big. After the tryout, St. Mane, who just years before had opened a sporting goods store at 42nd and 28th Avenue South, approached the boy and his father and offered to help him get into a properly fitted pair of skates.

The boy and his father showed up at the shop and left with a new pair of skates that fit. Little did St. Mane know at that time that he would be changing Minnesota Hockey and helping create a “miracle”....as well as changing his own family!

The 11 year old boy with the skates that were too big was Mike Ramsey. With the new skates, Ramsey got better and better. He quickly became the best on the ice every time he stepped on the ice at Hiawatha Park in South Minneapolis.

Ramsey would go on to play hockey for the Roosevelt Teddies and he would put together what may be among the most amazing three years for a teenager ever in the sport of hockey. In 1978, he lead the Teddies to the State High School Tourney.

Herb Brooks took notice and came calling in 1978. He stopped by the Ramsey household and told Ramsey that he wanted him on the University of Minnesota Golden Gophers and that he would provide a half scholarship to the prospect. Ramsey’s father, Bud, let Herb know that if his son was going to wear a Gopher sweater, Brooks would need to provide a “full ride” or he wasn’t coming. Ramsey was crushed as he always dreamed of being a Gopher and he saw that dream fading as Brooks grabbed his coat and hat and walked out the door. A few days later, the phone rang and it was Brooks offering a full scholarship. Ramsey would be a Gopher!

In 1979 he played for Herb Brooks and helped that Minnesota Gopher team win college hockey's greatest prize, the NCAA National Championship. Herb saw the superstar potential in his freshman, and brought him along as the youngest player on the 1980 US Olympic gold medal hockey team where he saw considerable ice time in every game helping the United States topple the reigning power and their team of experienced 'professionals', the Soviet Union.

After the olympics he jumped right into the 1980 NHL playoffs with the Buffalo Sabres. One of the longest careers for an American born player had begun. Ramsey played 18 years in the NHL – 12.5 with Buffalo, 2.5 with Pittsburgh, and the last three years with the Detroit Red Wings. Ramsey went on to be just the third American born player to play more than 1,000 games in the NHL. He played 1070 NHL games, scored 79 goals and added 266 assists for a total of 345 career points!

After retiring from the NHL, Mike returned to the Buffalo Sabres as an Assistant Coach. However, Minnesota was home for Ramsey and he moved back. Soon the call came in from the Minnesota Wild asking him to join the coaching staff where he helped coach for 11 years as an assistant.

He was inducted into the USA Hockey Hall of Fame in 2001.

Ramsey changed Minnesota hockey...but what about changing Bill St. Mane's family? Mike married his high school sweetheart (and Bill’s daughter), Jill St. Mane. Together they had three children. Their daughter Racheal won a State Championship with Minnetonka and three NCAA Championships with the Minnesota Gophers. Their son Jack is also playing for the Minnesota Gophers and was recently drafted by the Chicago Black Hawks. The apple doesn't fall far.....and it all started with a pair of ill fitting skates!

St. Mane's Sporting Goods still operates today in South Minneapolis and is the oldest independent sporting goods store in the State of Hockey!

Read more about Minneapolis' Hall of Famers by visiting the Hall of Fame...just CLICK HERE 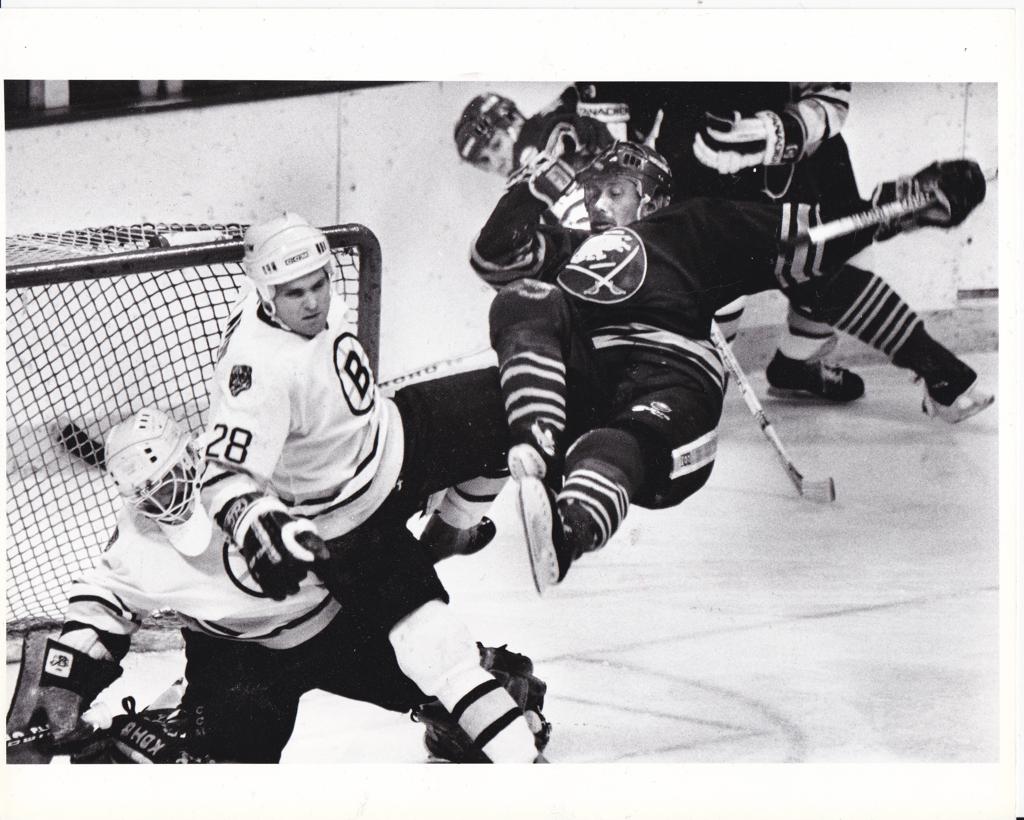 Two of Mpls' Greatest...Ramsey and fellow Mpls Hall of Famer Reed Larson tangle in front of the net - 1988 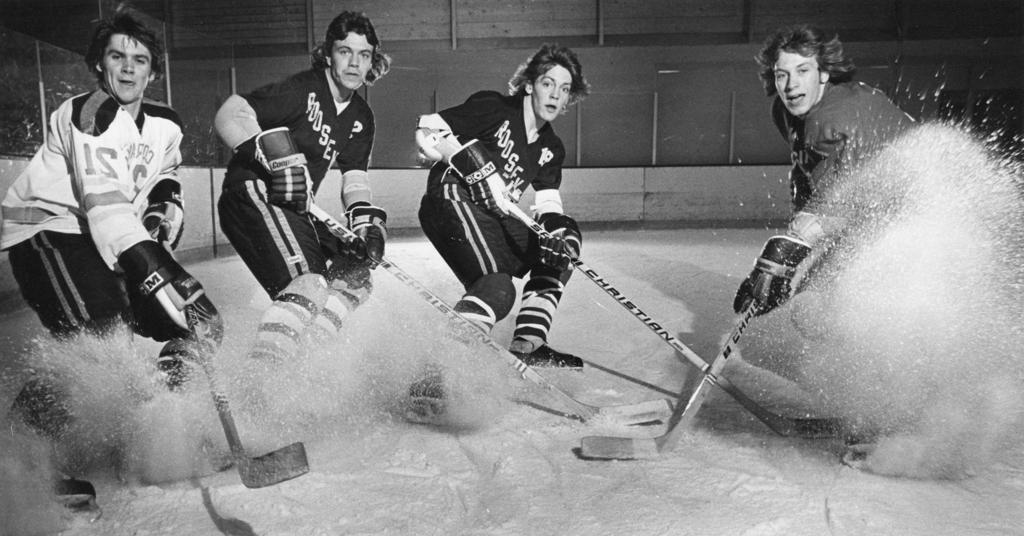 Drafted 11th 1979 NHL Draft - Buffalo Sabres
**The first American to be taken in a first round of the NHL draft, paving the way for future American hockey players. 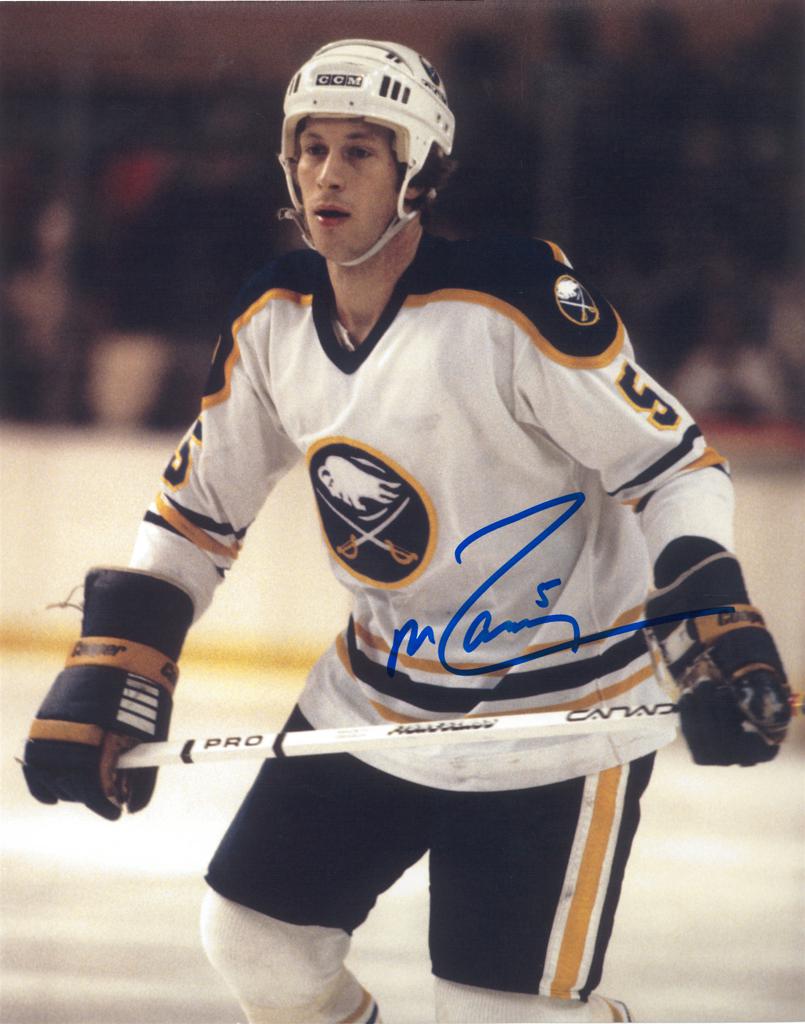 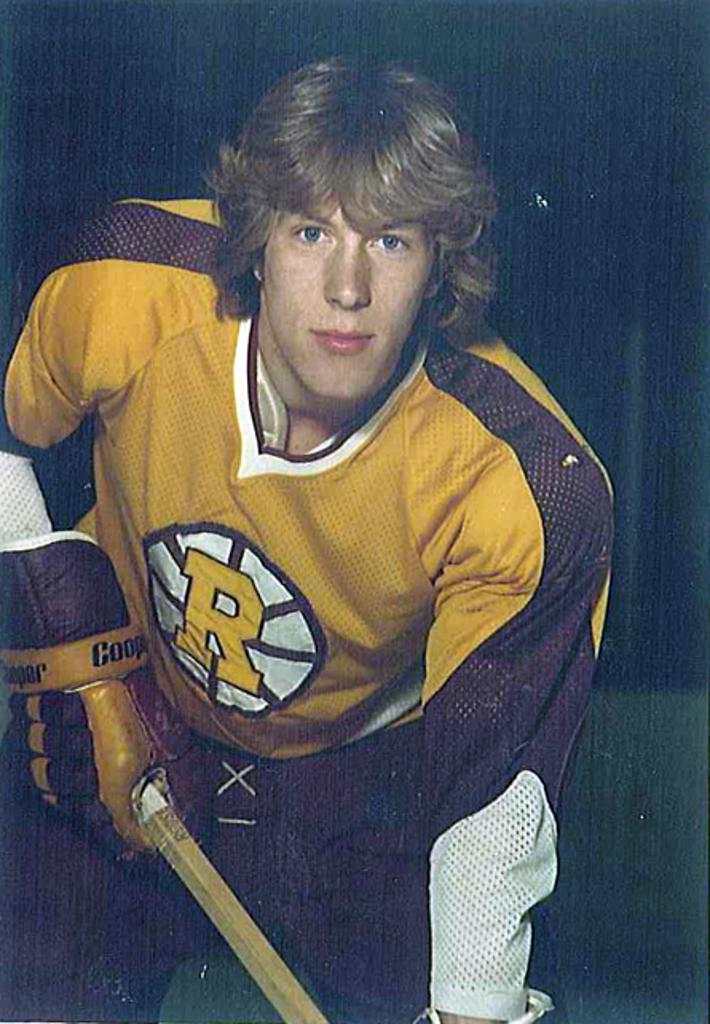 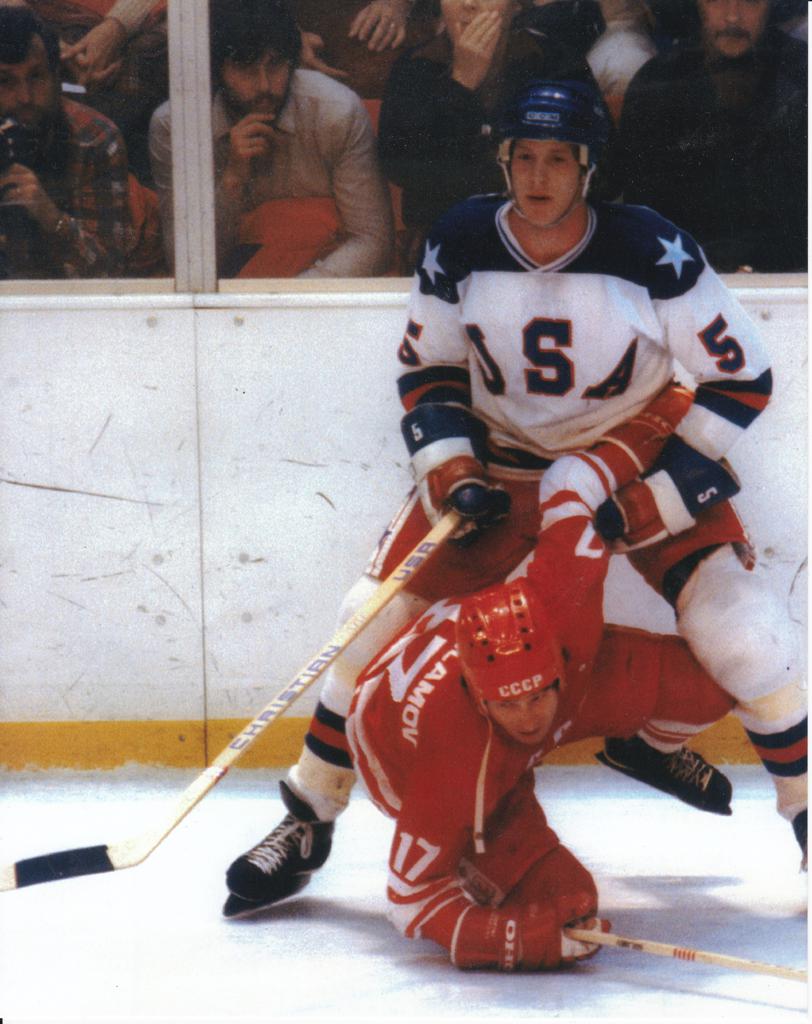